Although we will continue to give you advice right up to the day of your departure here is some information to help you plan the initial stages of your safari.

For travel purposes Africa can be split into the following areas. Travel between these areas is usually more difficult than staying in one area. The majority of this website focuses on the first two of these areas (East and Southern Africa) as these are the best areas to visit.

East Africa: Tanzania is a main destination (with the Serengeti, Ngorongoro Crater, Mt Kilimanjaro and Zanzibar). Rwanda and Uganda are popular for their gorillas, whilst Kenya is famous for the Maasai Mara and its private game areas.

Southern Africa: Zambia is the best place to visit Victoria Falls, Botswana has excellent game viewing in the Okavango Delta (but no coast), South Africa has a little bit of everything. Mozambique has an excellent coastline and diving.

Northern Africa: The main countries to visit are Egypt, Morocco and Ethiopia. Three distinct interesting ancient cultures, however not at its most stable at the present time.

West Africa: A culturally diverse set of countries like Ghana, Nigeria, Burkino Faso, Benin, Togo, Ivory Coast, Congo and Liberia but frenetic, with poor infra-structure and hard to travel around.

Central Africa: Countries like Chad, Sudan and Central African Republic – there aren’t many travel options here at the moment.

Please contact us for further information regarding safari planning. 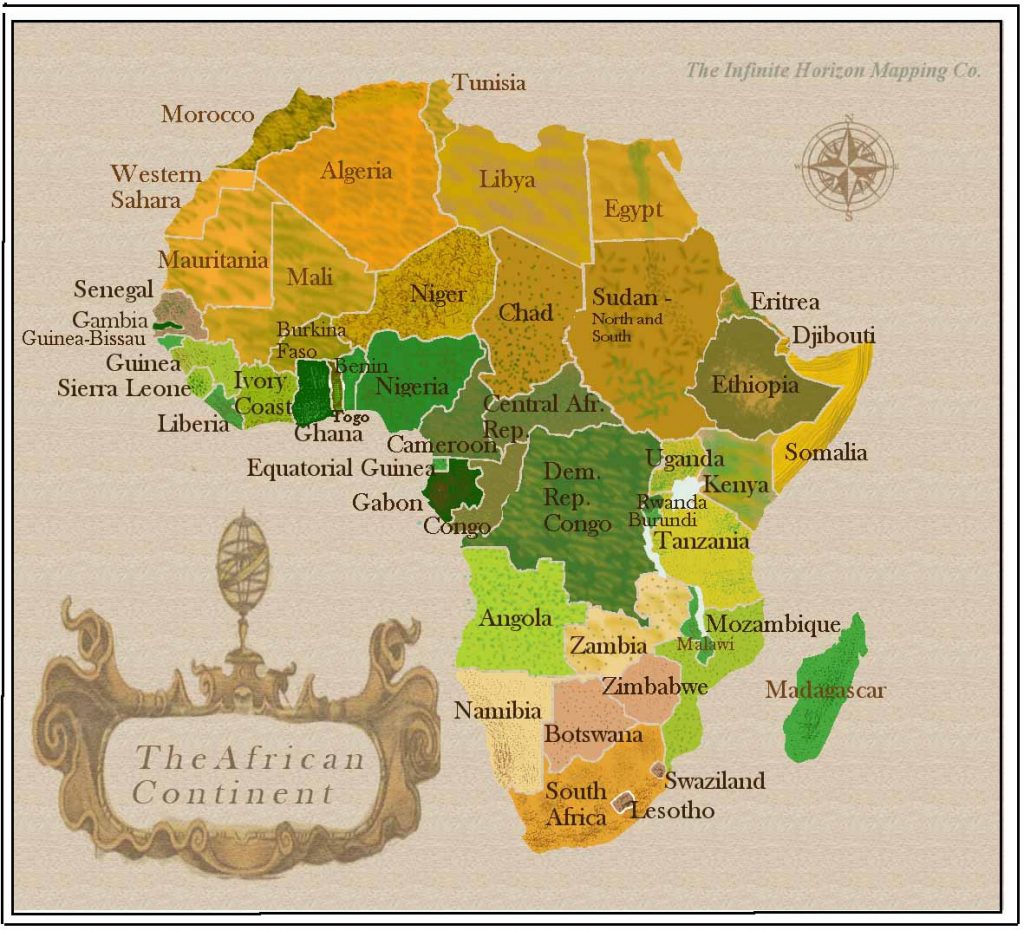 East Africa spans the Equator and has a pleasant, tropical climate. There are two rainy seasons (the Short Rains in November and the Long Rains in April/May). The long rains especially can disrupt travel plans. The coast is wetter still at this time. Average inland summer temperatures are 30 C but in the highland areas it is several degrees colder and the coast is warmer.

Each country has its own currency but many are not available on the international market, therefore it is best to bring US dollars with you. Dollars are accepted in most major tourist lodges and hotels. There are ATMs and banks but they aren’t always working or in your area so bring a reasonable amount with you as well. ATMS will give you local currency. It is a good idea to change some into the local currency once you are in the country. Travellers Cheques are not accepted in many places so these aren’t such a good idea as they once were.

The physical geography of Africa has effected its people and cultures, nation building and the evolution of its wildlife – including humans.

The deserts of North Africa kept sub-Saharan Africa free of European and Arabic people and animals for millennia. The mountains of Ethiopia kept it independent and distinct. The jungles of the Congo basin kept the people of West Africa culturally separated from the East.

However the Great African Rift Valley – where East Africa is slowly splitting from the rest of the continent has the biggest effect of all. It creates mountains, valleys, lakes, volcanic eruptions, jungles, grasslands and semi-deserts. This created fertility and diversity which allowed a huge array of species and habitats to develop which became the driving force for a new set of intelligent hominids to evolve. The lions of the Serengeti shaped your brain!

The destinations and itineraries on our website can all be tailored to suit your needs. We’d be happy to help you with any questions, please simply click on the contact us button below.

Please fill in the email below to sign up to our newsletter.